October 31, 2018 – A day after Typhoon Rosita made landfall in the province of Isabela, the Municipal Action Team (MAT) of Echague has started doing response operations to affected individuals and families in the municipality.

The MAT is also lending a hand to the Local Government Unit (LGU) of Echague and other frontline agencies in doing initial rescue and clearing operations in the municipality. 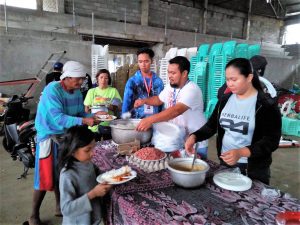 Mr. Paolo L. Laggui, Project Development Officer II of the Sustainable Livelihood Program (SLP) and MAT member of the municipality, said that coordination with the LGU ensures the prompt delivery of services to families and individuals affected by the typhoon.

Aside from this, the MAT team also augments the basic needs of those who were evacuated by cooking food for them.

Joan M. Arao, also a Project Development Officer in the area, relishes the fact that they can extend help to those in need during disaster situations. 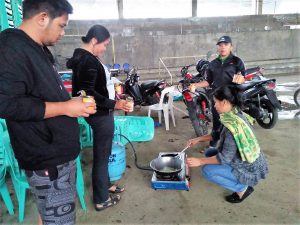 To date, 8,365 families including 31,221 individuals were affected by the typhoon in the province.

To address those affected, the field office distributed a total of 3,270 family food packs to the province of Isabela, 160 of which were given to affected families of Echague.

The field office is still on high alert as other parts of the region are still experiencing the brunt of the typhoon, with the Disaster Response and Monitoring Team (DMRT) still on 24/7 duty to consolidate the number of affected families and individuals and assess the needs of those affected based on the reports submitted. ### By: Chester Carlo M. Trinidad, Social Marketing Unit