October 12, 2018 – About a month after Typhoon Ompong made landfall in the region, citizens of Dupax Del Norte in Nueva Vizcaya province recall how fortunate they were that they followed preparations made by field office staff and their local government unit (LGU) that minimized the extent of damage to their lives and livelihood.

Ms. Sheila Mie Naboa, one of those who were evacuated from Barangay Lamo, said that they were provided with all their necessities from the time they arrived in the evacuation center up until they were allowed to go home. 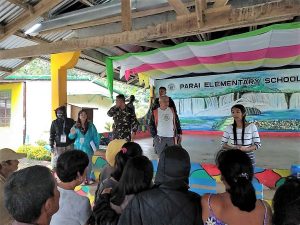 A total of 178 families including 554 individuals were pre-emptively evacuated before the landfall of the storm on September 15 to seven (7) evacuation centers throughout the municipality while 300 family food packs were prepositioned by the field office to the area as augmentation to the existing relief goods of the municipality.

Dimple Mauricio, the Municipal Link for the Pantawid Pamilyang Pilipino Program and team leader of the field office’s Municipal Action Team (MAT) in the area, said that the team joined staff from the LGU in going to different areas within the municipality to identify families at risk.

The team had to convince families to evacuate and though some initially hesitated from leaving their houses, they eventually relented given the premise of a safer place where they can stay during the storm. 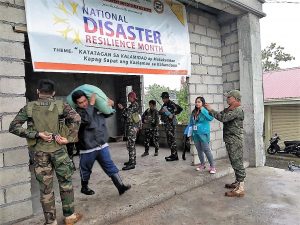 No casualties were reported in the area and only minimal damages to houses were seen, a testament to the shrewd preparation made by the MAT team in cooperation with the LGU and the cooperation of the town’s people to the conduct of the evacuation endeavor. ### By: Chester Carlo M. Trinidad, Social Marketing Unit