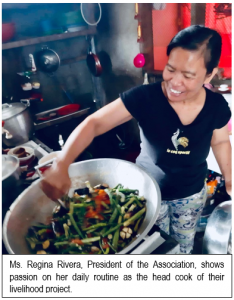 The joy of a mother seeing her family gather around a dining table is incomparable. Seeing the delight in the eyes of her children as they savour a simple yet satisfying meal is most comforting. The compliment that she gets from her husband for her self-less care, the laughter of her children that resonates from the four walls of the kitchen and the sharing of how their day went by and the little victories they won for the day, these are the little moments of motherhood perfectly captured in its rawest form.

Not everyone would notice that behind the satisfying meals is a struggling mother trying to stretch the meager amount in her pocket. This is the story of the daily challenges of a mother to turn an empty pot into a decent meal. She is constantly challenged on how she will manage to ease the pain of the empty stomachs of her children.  As she sees her calloused hands, the stain of charcoal on her fingertips, the trace of mired cooking oil in her skin and some scars from knife cuts, it reminds her of the sacrifices from the years of cooking in her kitchen.

Six mothers from the Municipality of Dupax Del Sur, Nueva Vizcaya typifies the life of poverty. They are all active members of the Pantawid Pamilyang Pilipino Program. The aforementioned mothers were Regina Rivera, Juanita Hidalgo, Marites Calderon, Marites de Guzman, Elena Salirungan and Nieves Rodriguez. They share the same predicament on how they will consistently bring food on their tables. Three of them were plain housewives who were dependent on the percentage-based income of their husbands on farming while the others resorted to being all-around helpers/cooks in their neighborhood, earning P150.00 a day. The reality of having limited opportunities to earn burdens them since they struggle to provide the needs of their families. Despite their hard work, most times it still isn’t enough. The financial constraints felt like an invisible chain that tied them for the longest time. 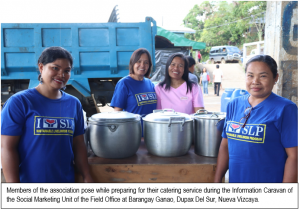 Dupax Del Sur is a second class municipality of Nueva Vizcaya, a landlocked one in the province. The area is generally mountainous and displays forest areas in the eastern portion. Its economic activities focus on agricultural producing rice, sweet potato, cassava and vegetables. The municipality also produces timber for local building industry.  The locals rely greatly on the seasonal income from agriculture.

On October 2017, the aforementioned group took a chance to try and change their current situation. They embraced the tenets of Sustainable Livelihood Program (SLP) and became part of an association. They drew inspiration from their shared passion to cook for their families to further their skills on cooking. They underwent Skills Training on Management and Cookery in partnership with Theodoro’s Skills Training Assessment Center.  The group was provided with a total of P120, 000.00 intended for their training expense and start-up capital for the acquisition of assets to put up their chosen livelihood endeavor.

After the training, the group was able to put up a carinderia (Marjen’s Restaurant) strategically located in the municipal’s public market and transport terminal. The group used their start-up capital to acquire kitchen utensils, fixtures, materials and operating expense to run their restaurant. They served meals and snacks to an average of thirty customers a day. They now operate seven days a week and caters to their regular clients such as market vendors, market goers and drivers. Apart from that, they also offer catering services to offices and other private individuals in the locality. They occasionally serve as a service provider during meetings and seminars of the Municipal Local Government Unit (MLGU) and Barangay Local Government Unit (BLGU) in Dupax Del Sur. They earn an average gross income ranging from P1, 000.00-P3, 000.00 a day depending on the flow of customers. Part of the income goes to their own salaries as cook, cashier and server ranging from P200.00-P250.00 a day. They also regularly set aside their average net income ranging from P500.00-P1, 000.00 for their project diversification fund. 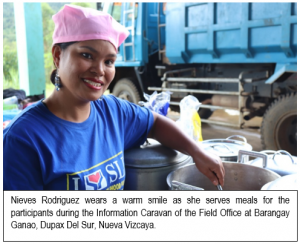 They were also given the opportunity to bid as one of the suppliers of the Field Office and won. They provided catering services during the Information Caravan of the Social Marketing Unit last June 27, 2018. The group earned a gross income of P18, 000.00 which translated to a net income of P5, 000.00. Moreover, they also catered in one of the events of the Department of Education and earned a gross income of P55, 300.00 with a net income of P16, 000.00. The financial gains from this livelihood endeavor became an additional income and helped each members augment and support the needs of their families. They were able to provide decent meals for their families which they previously struggled to do. Their steady income helped send their children to school particularly for Ms. Regina Rivera, president of the association and a solo parent for almost ten years. The opportunity lend her a hand to meet ends.  It was also a fulfilment of her dream of managing her own restaurant since she was a long time cook under a private employer. “Dakkel nga banag nga naikkan kami ti sarili mi nga negosyo iti SLP, nangnangruna kenyak nga maysa nga solo parent (Malaking bagay na nabigyan kami ng sariling negosyo ng SLP, lalong-lalo na sa tulad kong solo parent)”, Ms. Rivera said. 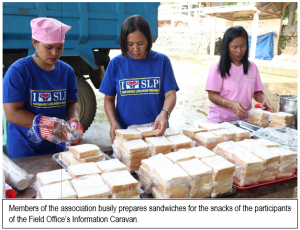 Today, the members continuously improve their chosen endeavor. In the near future, they plan to acquire their own space and expand their restaurant and catering services. More than the financial gains, the members were thankful for gaining life skills. For them, the entire experience of being a member of SLP was empowering. It enabled them to see opportunity outside of the four walls of their kitchen and make the most out of their skill. They now come to a point of pouring out their hearts on cooking not just to ease the hunger of their customers but make a living out of their passion. ### Written by: Melisen A. Taquiqui, SLP Social Marketing Officer