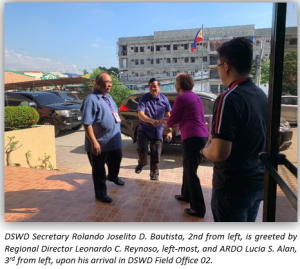 The secretary was visiting the region to check on the field office’s staff and facilities when he made a quick stop to the members of the Philippine Association of Social Workers, Inc. (PASWI) Cagayan Chapter who were gathered for a training to enhance their skills along social work.

Secretary Bautista, himself a retired military man, is of course not a stranger to the difficulties of life in the field, traversing rivers and muddy terrains just to get to far-flung locations as much an ingredient of his army life back in the day as it is to social workers working on the field these days.

He was basically saying that although comparing military work to social work is like comparing apples to oranges, the difficulty and commitment needed to accomplish the rigors of both tasks is just the same. 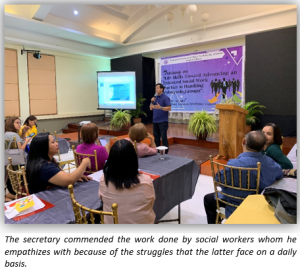 On the morning of the said day, the secretary arrived in DSWD Field Office 02, 10 minutes ahead of his projected arrival, without much fanfare.

He proceeded to the Office of the Regional Director for a quick change of attire then proceeded to meet with the field office management to discuss the implementation of programs and services in the region.

He then went on to tour the field office units and sections with Regional Director Leonardo C. Reynoso before proceeding to launch the field office’s pair of Compendium of Feature Stories called Pagbangon and Pagsibol, meeting and commending staff while inserting a joke or two along the way. 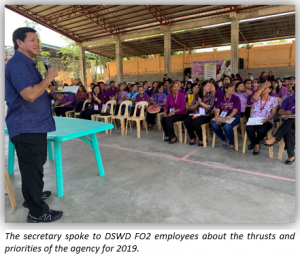 He then proceeded to talk to the field office’s employees in the multi-purpose building adjacent to the main building where he mentioned the priorities of the department for the year while thanking the staff for their commitment to work amidst the tremendous responsibilities given to the agency.

He even mentioned that in one’s professional career, if a person strives to succeed and does his best along the way, then the end will take care of itself. 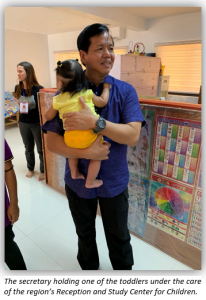 Despite a stance that typifies an archetypal soldier with his chin up, chest out and shoulders back, the secretary can be quite jolly around people especially when he met the field office’s clients in its centers.

He joyfully checked the artwork of clients from the Regional Haven for Women and Girls (RHWG) and got impressed enough that he even arranged for him to purchase one piece that he liked so much but with a catch, that he will only pay for it if it was sold to him with its fair market price, no discounts just because he is the secretary.

Despite the searing heat of the sun, the secretary trudged on and next visited the Reception and Study Center for Children (RSCC) as his smile warmed the hearts of the center’s employees and clients alike. 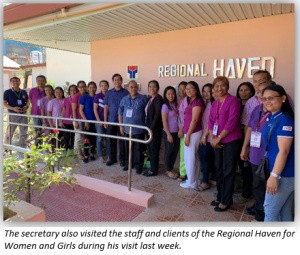 He then visited the toddlers under the center’s care and even carried some of them. He spoke fondly with the house parents caring for them and even took photographs with them.

His last stop during this trip to the region was at the Cagayan Valley Regional Rehabilitation Center for Youth (CV-RRCY). He checked the facilities under construction as well as the newly-built rooms that can house center and field office visitors in the future.

The secretary then spoke to the clients of the center, the Children In-Conflict with the Law (CICL), to give them advice on how to process the experiences that they had at such a young age. 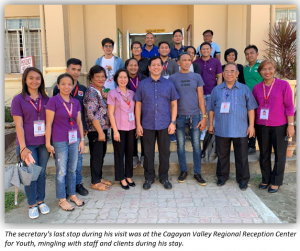 He even asked the clients who among them aspire to be soldiers one day and as the boys’ hands raised one by one, he promised to them that he will help make their dreams come true.

The secretary briefly retreated to the conference area for a quick sip of a buko juice prepared by center staff while chatting with the staff gathered about the history of the center.

His visit ended moments later after as he and his team hit the road back to Manila with a message of clarity to those he was able to meet; do your best and you shall be rewarded, whatever shape or form that may take. ###