The shore is a silent witness of change. It sees the days where the vast sea radiates calmness. On some days, the shore catches the raging crash of the waves and the uneasiness of the rumbling waters as if a storm is about to pass. It also sees how the sea reflects the sky and displays the varyin 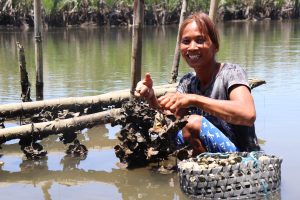 g color palette. It is the everyday bystander that both feel a fisherman’s bliss after a bountiful catch or a fisherman’s gloom after going home empty-handed.

The shore has been the comfort abode of a young lad from Buguey, Cagayan. It was her playground, a place where she untiringly built her sand castles along with her dreams.  She grew up knowing what the shore and the sea can offer.

Life along the shore might seem steady for some but not for Ms. Melva C. Sebastian. Her childhood memories would entail long days with her parents going off to shore to make ends meet. On her second year in high school, she was forced to quit her studies due to financial constraints. Her parents could no longer afford to sustain her education since the priority was to ease their empty stomachs. That very moment gave her qualms for her future.

The long stretch of the shore resembles Melva’s long journey amidst poverty. In 2005, she built her own family and married Marcos Sebastian, a fisherman from the same town. Their union was blessed with two children. To sustain the needs of the family Melva worked as a house helper while her husband earned a percentage basis income in fishing. Only about four years into their marriage however, her fate was put to the test. Her husband suffered from a toxic goiter, an autoimmune disorder that halted him from working. Melva was left the burden to provide for their family without minding her own struggle as a differently abled person. Aside from being a house helper, she doubled her efforts and engaged in “makidusdos”, a local term for gathering native grabs along the mangrove forest and did side line job as a laborer in oyster culture farms. The condition of his husband worsened as he also started suffering from heart complications. She was consumed by guilt since she couldn’t consistently suffice the medication of her husband. The circumstances left her no choice but to enter into a cycle of debt.

Just like the shore that withstood the test of time, Melva typified a strong character that withstood whatever life may bring. In 2017, the Sustainable Livelihood Program (SLP) shed light to a mother longing for an alternative source of income. It gave her the opportunity to be part of Sunrise SLP Association and received capital augmentation amounting to P15,000.00. She ventured in oyster culture/production as her former employer lent a portion of their fishpond. The capital was used for the purchase of raw materials for oyster culture such as spot collector/oyster hangs, bamboo, rope and the like. A portion of the fund was also use to purchase crab seeds for her secondary project. 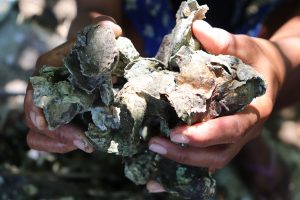 She now gathers an average of about two kilos of oyster daily and earns an average income of P6, 000.00 per month. She directly delivers her produce to a private buyer, an oyster          sauce maker on her barangay. On one hand, she earns an average gross income of P3, 500.00 every production cycle on her crab venture. As part of her expansion, she started to assemble spot collector/oyster hangs where she earns an additional weekly income of P700.00-P1, 000.00. The Bureau of Fisheries and Aquatic Resources (BFAR) served as her regular client on her spot collector/oyster hangs and earns an average of P7,000.00 per order. The steady income supports the daily needs of her children and the medication of her husband which she previously struggled to provide. With a teary eye, she even mentions that she can now somehow pamper her children. She can occasionally treat them outside and buy them new clothes and toys. More than the material things, the delight from the faces of her children makes her sacrifices worthwhile. For her, the opportunity did not only provide her means to bring food on their table but also restore her faith for a better future.

Looking back on the days where the waters seemed indifferent against the shore, the best picture on those days were of Ms. Melva struggling to fight life’s adversities. Bringing the lessons from her past, she now faces life with so much hope and positivity. She is more than thankful for the changes that SLP brought for her family. In the near future she plans to put up her own oyster sauce processing as part of her diversification plan and will consistently find ways to improve her chosen endeavour. “Dakkel nga pagyamyamanak nga naikan nak iti SLP ti puhunan tapnu maadanan nak iti sariling nga negosyo, manipud idi malaganan nak met ten nga masustener iti agas ni mister ku (I am immensely grateful that SLP provided me with the initial capital to start my own business, since then I can now sustain the medication of my husband),” Ms. Melva said. Written by: Melisen A. Taquiqui, SLP Social Marketing Officer