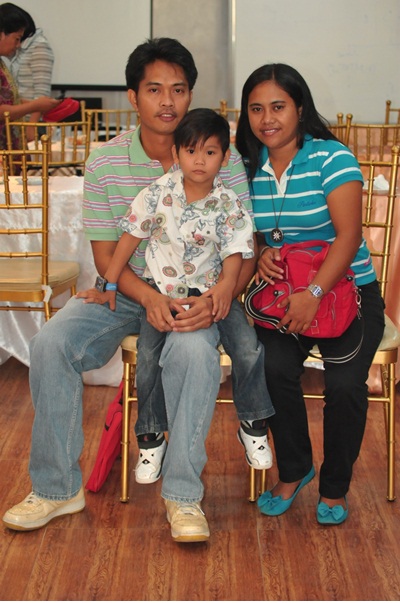 In photo: A love worth declaring. Mr. and Mrs. Ronald Balbuena, proud adoptive parents with their son“Tyrone”.

She is a teacher by profession. For how many years of staying in her chosen profession, she never gets tired of molding and teaching her pupils. She believes that it is not only a profession but also mother to these innocent learners. Spending years as a dedicated teacher and a mother, she met her man and became her husband.

In their two years of marriage they were excited to build a family on their own. They wanted a child but it was so uneasy for them to have it. For quite long, they undergo several check-ups and visited hospitals to get advices from the experts. Until both of them decided to just leave everything to God. They believe that God has perfect timing and purpose for everything.

Time and trials really tested their patience, for how many years they were not still given a child.

Until she considers the idea of adopting, it was not easy for her to open up to her husband. But time really decides for them. She seeks help to her sister who is actually working at DSWD. They have gone through the matching conference, legal processes and attended the several seminars until finally they were given a special gift which later on they named as “Tyrone”.

The child was only one year and six months then. But according to her, when she saw her son he already felt it that “Tyrone” is indeed her son. The trials and challenges do not end there; they experienced hardship of introducing the child to the whole family most specially that her mother-in-law is against in the concept of adopting. It took some time until her mother-in-law accepted “Tyrone” as a member of their family. Despite the unsolicited advices from others, the love they have for “Tyrone”, made their family even stronger. One of the biggest trials that they have encountered is when “Tyrone became sickly. This trial really tested them on parenting and also in financial concern. According to them “Tyrone” was never a burden and he will never be. She shared that since the day that “Tyrone” came in to their lives everything has changed. They experienced immeasurable happiness and they already felt the completeness of having a family.

As the cliché says that “there is no perfect timing and they will never be ready to it” confrontation came. “Tyrone” asked them if where did he come out, they were shocked but they know that there is no easy way in telling the truth. It was really hard for them to explain to their son at his early age.

But she remained calm and explained to his son patiently and slowly. She told her son that he has two mothers and in this it doesn’t make him a lesser person instead a blessed one. She was glad that “Tyrone” took it in a right way and he is even proud to share it in their classroom.

According to them they are really thankful to God that they given them “Tyrone”; a smart and talented boy. They consider him as their best luck. Later on she got pregnant to a beautiful baby girl, she confessed that because of “Tyrone” they were so blessed and so many prayers were answered. They never felt even more complete as what they are experiencing right now.

This only shows that there is no measure of being a true parent whether it is your blood and flesh or not. There is no perfect formula, because indeed “love sees no difference”. They are Mr. and Mrs. Ronald and Teresa Balbuena, adoptive parents of Tyrone from Isabela province. ### By AILYN P. AGLAUA, NHTS-PR Administrative Assistant V