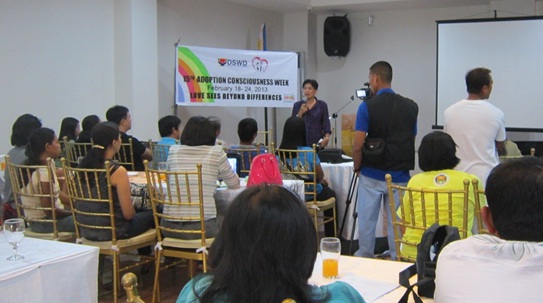 In photo: ARD Ponciana P. Condoy emphasizes on the unconditional love of adoptive parents to their adopted children, truly, the adopting a child is a true love worth declaring.

As part of the celebration of the 15th Adoption Consciousness Week, the Department of Social Welfare and Development Field Office II conducted an Adoption Forum at Hotel Carmelita, Tuguegarao City, on February 28, 2012.

Bannering the theme “Loving Beyond Differences”, the Forum was attended by couples who have adopted children from the Reception and Study Center for Children (RSCC) or referred to as the adoptive parents, and with couples who are planning to adopt or the potential adoptive parents. The Social Welfare Officers from the SWAD of Cagayan, Isabela, Cagayan and Nueva Vizcaya were also present during the activity.

The Adoption Forum changed the misconception that adopting does not allow potential adoptive parents to choose who among the children will they adopt, as often portrayed in films. Ms. Rosario Corpuz, the Focal Person for Adoption Resource and Referral Section emphasized that “adopting a child is not like shopping, wherein couples will choose who they will adopt.” She said, “That’s why we do not allow our potential adoptive parents to see the children in RSCC, instead we do matching, wherein we do thorough deliberation to decide who among our declared legally available for adoption children will suit them. But we ask for their preferences. Ang pag-aampon, ay parang pagbubuntis, na kung saan hindi naman natin mapipili kung ano ang itsura ng lalabas na sanggol.”

Meanwhile, Atty. John Amador L. Malana, who discussed about the Process Flow of the Legal Aspect of Domestic Adoption, said that couples who have simulated the adoption of the child are criminally liable. Adoption is the legal process by which a child becomes the legitimate child of the adopting person/s. Simulation of birth on the other hand occurs when a childless couple, for example, comes into possession of a baby or child, given to them by a midwife, an unwed mother or a relative, and this couple then applies for a birth certificate, making it appear that the baby or child is their biological offspring.

He also discussed other salient topics regarding adoption like the process of adoption and its requirements.

Three adoptive couples shared their testimonies regarding adoption and the change it brought to their lives.

Mr. and Mrs. Ronald Balbuena of Baggao, Cagayan, who became parent to Tyron, a child from the RSCC, said that since Tyron came to their lives, everything changed, for the better. “Nung una ang daming problema, kasi may mga tao na hindi pa rin open sa pag-aampon, but still we said to ourselves that Tyron is for us. Lahat ng pagsubok ay kinaya naming, lalo at napakasakitin ni Tyron noon. But thanks to God because he grew to a healthy and smart boy,” said the happy couple referring to their cute baby boy.

Also, Mr. and Mrs. Ireneo Nuñez of Ilagan, Isabela said that having Josther, also a child from RSCC, made their relationship stronger. According to Mr. Ireneo Nuñez, he became a more responsible husband since he became father to Josther. “Dati kasi pag Friday gumigimik ako, pero nung nandiyan na si Josther, medyo nabawasan na. Umuuwi na rin ako kaagad after work. My wife and I are very happy because we now have what we can call a family,” said Mr. Ireneo.

The event seeks to highlight the various issues on adoption and create public awareness and support for the legal adoption process. This year’s theme focuses on the unconditional love of adoptive parents for their adopted children. ### By MARICEL ASEJO, Pantawid Information Officer