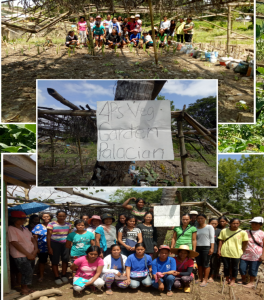 Pantawid Pamilyang Pilipino Program is a poverty-alleviation program of the National Government targeting the poorest of the poor households in the country. For years, it has provided financial aid in ensuring that children remain in school and live a healthy progressive life. Currently, the program urges its beneficiaries to engage in backyard or communal gardening in order to complement the rice subsidy and promote healthy life style of the households.

Barangay Palacian, one of the areas of the program for more than 7 years, is one of the 23 barangays of San Agustin Isabela with an established communal and backyard garden. The group is composed of 28 active members of which 3 are male grantees and 25 are female.

The “Gulayan” area is established in an open space beside the Barangay Health Center, made possible through the support of the local chief executive. The group was provided with a 9 x 5 square meter area through a barangay resolution to which the group immediately proceeded in cultivating the area. Headed by Geraldine Reyes, their parent leader, planting materials from the Department of Agriculture, the Municipal Agriculture Office as well as seed stock from the members themselves were used.

The garden is set up for areas where plots may be established for the leafy vegetables to plant in. For those where the land has more pebbles than soil or where the rain would cause the land to be waterlogged, the group used recyclable plastic, sacks or cans. The group grew petchay, sweet potato and beans on plots while eggplant, okra and tomatoes were planted on the makeshift pots. 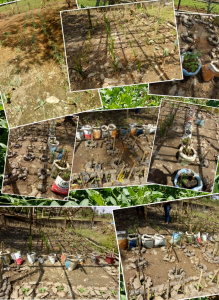 In order to maintain the garden, a schedule is set up every second Sunday of the month for the cleaning and weeding while those members who live nearby volunteered to water the plants regularly.

The garden is already in its second year of implementation, their last big harvest being on November 2017. Applying lessons learned from the previous year, the group learned to combat the extreme heat by covering the young plants with coconut leaves, and used the left-over fertilized soil from the barangay nursery as additional nourishment for their gulayan. The Family Development Sessions conducted by the Municipal Action Team members is an avenue for monitoring of the progress of the project. 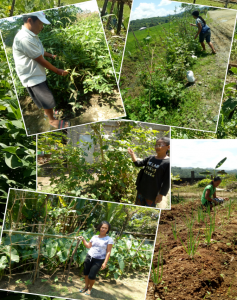 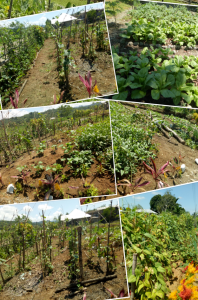 The Gulayan project made such an impact on their community that each of the households have also established their own backyard garden to supplement the produce they receive from the communal garden every harvest season.