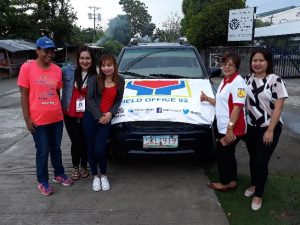 The Department of Social Welfare and Development (DSWD FO2) in partnership with the city government of Tuguegarao launched the 40th National Disability Prevention and Rehabilitation (NDPR) Week with the theme: Kakayahan at Kasanayan para sa Kabuhayan Tungo sa Kaunlaran with a host of activities to commemorate the celebration.

The activity, celebrated from July 17-23, 2018, was launched with a motorcade from the Technical Education and Skills Development Authority (TESDA) Region 02 vicinity in Carig Norte, Tuguegarao City going to the People’s Gym, Centro, Tuguegarao City last July 17, 2018 which was led by the field office and joined by partner agencies.

A program at the Tuguegarao City People’s Gym which was attended by about 300 Persons with Disabilities (PWDs) coming from Tuguegarao City and the nearby municipality of Iguig was done after the motorcade where select PWDs where given assistive devices such as wheelchairs and crutches.

Sheikha Luga, 5, one of the beneficiaries who were given a wheelchair, was so eager to use the device given to her that she used it immediately after receiving it from the field office.

OIC-Regional Director Lucia S. Alan mentioned that it is the field office’s priority to implement programs and services targeting vulnerable sectors like the PWDs so they can be empowered to also succeed in life. 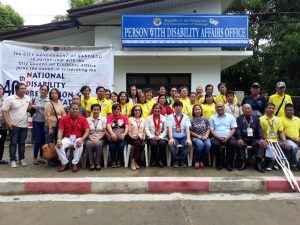 An inauguration of a new Person with Disability Affairs Office (PDAO) in Santiago City, Isabela was also done in line with the NDPR celebration last July 19, 2018 along with the launching of a new Center for the Elderly for the senior citizens of the city.

The culminating program for this year’s celebration was done at the Balai na Santiago, Santiago City, also on the same date, which was participated by OIC Lucia Alan and DSWD FO2’s focal for PWDs, Ms. Ramonita Malubag. ### By: Chester Carlo M. Trinidad, Information Officer II