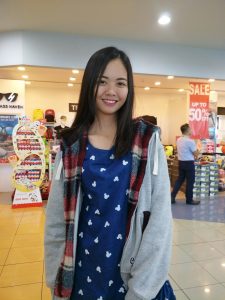 The path to success is not made with a golden brick road, nor is it free from any burdens. Its possibilities are as vast as the deep blue ocean giving one the liberty to choose one’s path. However, as endless as the options, the opportunities can be limited to those less fortunate. It is how one overcomes the limitations that finally bring end to the struggle that is fervently sought. This is my story, this is the path I chose to achieve my dreams.

I am Edleen Joy S. Pariñas born to Eddie C. Pariñas and Merlinda S. Pariñas of Andres Bonifacio in the rural town of Diffun, Quirino. First born in a brood of four, I was akin to the difficulties my parents faced in order to support us. My father worked as a driver for commuter vehicles and would do construction on the side while my mother took on different jobs mostly as a sales person.

When I started school, my parents took on more jobs, but still, I would go to school without anything in my pocket or occasionally, five pesos when the earning was good. My classmates teased me for my rundown clothes, meager supplies and paltry food. Those who didn’t were my friends and they were but a few.

With my parents hardwork and support, I joined various extracurricular activities and became an achiever, ultimately finishing primary school as Valedictorian at Diffun West Central School, class of 2010.

I was in secondary school when my family was selected as one of the beneficiaries for the Pantawid Pamilyang Pilipino Program. With the cash grants and my parents’ continuous industry, I was given more opportunities to join in school activities and even ventured into sports while also being crowned winner in a school pageant against other contenders who were college students. During vacation, instead of going out with friends or spending my hours idly, I worked as a sales person or did babysitting jobs. I kept the money I earned  in preparation for the incoming school year for college. Ultimately, I finished secondary school as the class Valedictorian at Quirino State University Laboratory High School.

Despite all my achievements, Tertiary education proved to be a more difficult path. As much as universities offered scholarship grants to poor and deserving students,  the grant only covered as much as the tuition fees. It did not include cost-of-living expenses which were more costly. I also had to consider that my three younger siblings who were also going to school. I knew that even my temporary stint as babysitter would not be enough to support my education.

As fate would have it, our Municipal Link informed us that I was recommended to be a grantee of the Expanded Students Grants-In-Aid Program for Poverty Alleviation (ESGP-PA). I was more than thrilled to comply with the requirements as well as enrol at Philippine Normal University – North Luzon Campus under the bachelor’s degree in secondary education.

Being away from my family, it was an entirely new experience for me. I was constantly overwhelmed by being homesick and anxiety. To counter this, I joined various extra-curricular activities and mingled with my fellow grantees. The ESGP-PA program even gave me an avenue to express myself during various development conferences and it has helped me gain confidence at public speaking. 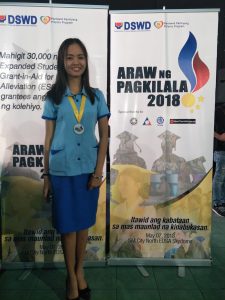 At present, I teach at Philippine Yuh Chiau School while reviewing for the upcoming Licensure Examination for Professional Teachers. Looking back, I think about the difficulties, the frustrations, the helplessness and poignant memories from my past. I could have given up but didn’t and this is where that path led me. I am treading on a new chapter with new challenges but I am confident that I can make it, this is the path I chose to take.