Reina Mercedes, Isabela – Shekina Glorie Sario’s thoughts were to go home Monday evening to be with her family as Typhoon Rosita began its onslaught in Isabela Province, knowing how hard it is to leave family members during disaster situations.

But as it is when it comes to disaster situations, she chose to stay in the Municipal Action Team (MAT) office to monitor the situation and consolidate reports that would be needed for submission to the DSWD Regional Office. 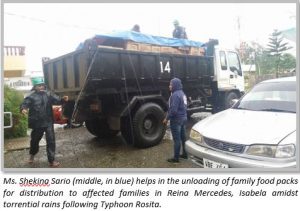 Aside from conducting visitation and helping the local government unit (LGU) in assessing the needs in evacuation enters to ensure the welfare and protection of evacuees, the MAT team also led the distribution of relief goods to affected families and individuals.

During the typhoon’s peak, a total of 12 evacuation centers across 14 barangays were opened in the municipality, thereby guaranteeing that the MAT’s hands were full when it comes to responding to the needs of the evacuees.

A total of 443 families including 1,615 individuals were affected in the municipality as of the latest report coming from the field office’s Disaster Response and Monitoring Team (DMRT). 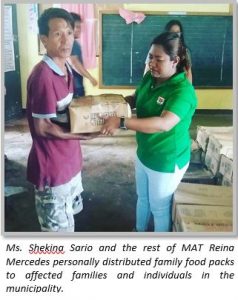 Despite all of these, Ms. Sario and the rest of MAT Reina Mercedes stayed true to their mandate of quick and prompt service even when it means sacrificing sleep and rest to get the job done.

As of this writing, the MAT Team led by Ms. Sario continues to do response operations in the municipality to cater to the needs of affected families in the area. ### By: Chester Carlo M. Trinidad, Social Marketing Unit