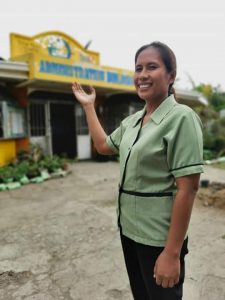 On a cozy corner of the Administrative Office sits Ailene Mabborang Gannaban, Guidance Counselor for 9 years running at Solana Fresh Water Fishery School. She is patiently assisting a student secure school records in time for enrollment to the nearest State University. After imprinting the school seal on the student’s report card, she delivers the same and bids her former student good-bye with a blessing.

“I always wondered why my siblings and myself didn’t have any artistic talent like singing or playing instruments,” she begins with a bright smile. “But then I realized it is because we were meant for something else, to serve our community and our country!”

Ailene finished her primary and secondary school in Bauan Elementary School and Solana Fresh Water Fishery School respectively. She completed her Bachelor of Arts in Mass Communication at Cagayan State University in 2003. Her first employment was at Green Meadow Development Foundation from 2003 to 2009 as a Child Management Staff  then as a psychometrician for Oasis Neuro-Psychological and Counseling Center from 2009 to 2010.

During her seven years of employment, she has come to identify herself with the needs of her students and yearned to be able to provide positive influence on their lives that she took her masters degree in Guidance Counselling and Master of Arts in Psychology at Cagayan State University from 2006 to 2010. That same year, she rendered her services as a lecturer for the same school but somehow felt she could be of better service in her hometown.

Herself being a product of a small agricultural school, she is concerned that poverty and lack of opportunities discourage many students from pursuing a degree or even completing secondary school. She believed that in returning to the grassroots, she will be able to inspire the youth to aspire for higher education as well as serve as a medium for them to explore their hidden talents.

Opportunity opened itself for her when she was informed that a position was opened at her old alma mater and on December of that same year, she became part of the institution as a guidance counselor.

Involvement with The Pantawid Program

Being the guidance counsellor, she was informed by the school principal that part of her responsibilities would be to provide support to the Pantawid Pamilyang Pilipino Program, the new flagship program under the Department of Social Welfare and Development (DSWD), catering to the poor and vulnerable sectors of the community.

“I distinctly remember way back 2011, there was so much buzz about the program because the beneficiaries received lump sum of their cash grants,” she recounts vividly. “An orientation was conducted for the school principals as well as households on how the program is implemented. Basically, they discussed about the responsibilities of each member or stakeholder and how each should work together for the program to succeed. There and then the principal designated me as the 4Ps Coordinator, reiterating that it will one of the services my office would provide.”

For her, the Pantawid Program is one of the most ambitious programs of the National Government under the Department because of the scope of coverage of services it provides directly to the people. But even with that it mind, she counters that it is innovative in a way that the services are given directly to the family head, in turn, giving the family the liberty to manage their finances in support of the whole household.

She recognizes that low educational attainment has greatly affected parents’ capacity to earn a decent income but with the assistance of the program, the latter are assured that they will be able to send their children to school while also working to provide for the rest of the family’s needs. She relates this to her own experience as a student, with her parent’s meagre income forcing them to borrow money a lot of times just to make ends meet. But with the program, parents are encouraged to invest in various occupation without the apprehension of sacrificing the children’s education.

She remains positive that through the program, Pantawid Pamilya beneficiaries will also be inspired to give back to the community by way of service. Through Family Development Sessions (FDS), she hopes that the outlook of volunteerism would be instilled in the mind of each beneficiary such that they do not view community-organized events and activities as means to solicit free labor but rather to give them the sense of being one with the community in promoting a prosperous and peaceful living. She is optimistic that one day, Pantawid beneficiaries would no longer just ask what the government would do for them, instead, seek for what they can offer to their country.

In the years that followed, she has observed success as well as challenges in the program. One of the challenges she personally encountered is the attitude of the students with their studies. As much as there were students who showed scholastic excellence, there were still a number of those who lagged behind in schooling.

“I frequently remind the young ones to study well and take advantage of the opportunity to study because out of the 1,092 student population, only a handful of them have their studies subsidized by the government,” she states with passion. “I want them to recognize the efforts that the government has invested on them and appreciate the blessings.”

As a guidance counsellor and 4Ps coordinator, Ailene has implemented various schemes in assisting students through their studies. Being a non-teaching staff, she was faced with the initial problem of not having direct interaction with the students on a regular basis. Here, she decided to request for audience with the students during their Individual Collaborative Learning (ICL) period, an hour given to the students for study periods and interaction with peers. 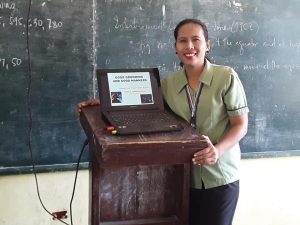 Working with the Community

Aileen would assist in other various non-curricular activities such as Feeding programs, Immunization programs and relief operations specifically for typhoons’ Lawin and Ompong. In fact, she spearheaded the school’s fund raising activity for the “Sagip Batang Marawi” to be given to affected Marawi children during the Marawi Siege.

Being a member of the Regional Child Welfare Specialist Group (RCWSG), she regularly attends Foster Parenting, Matching and Adoption Conferences with various stakeholders and DSWD to lend her expertise on child-rearing and cultivating a healthy family lifestyle.

A zealous follower of her faith, she organizes activities such as the Division Bible School for children, Operation Christmas/Good Samaritan Purse and Year-End Outreach Program for the children and elderly in Bauan Solana, Cagayan.

“As a child I witnessed my mother, together with her siblings, invite neighbours who were less fortunate to dine with them on weekends,” she recounts. “It’s that feeling of fulfilment each time the neighbors express gratitude which fuel my own resolve at continuing the practice my mother begun. In fact, we already do the community kitchen every Saturday in our own backyard.”

To support the various community outreach activities, Aileen would have no qualms fundraising through solicitation from friends and other family members. In fact, a lot of acquaintances pledge support in the form of cash, goods, clothing and volunteer work, at times, even her own students lend a helping hand. Aileen has a strong conviction when it comes to education. She believes that it is the gateway of opportunities for the learner who is diligent in his studies and remain steadfast despite the many challenges.

She believes that a secure school environment plays a role in nurturing students’ love for learning and self-actualization which is why she has fervently campaigned against bullying in school. She is keen to discern the slightest chance of bullying happening and has always reminded her students to treat each other with respect. The anti-bullying law was discussed during the ICL period and the topic reinforced through the setting up of an Anti-Bullying Board.

Another advocacy is her monitoring of the school attendance of Pantawid Pamilya student beneficiaries. She has set up her own monitoring form as well as an intervention process in order to address possible issues before it leads to the non-compliance of the student. As soon as the student incurs 3 absences in a month, a yellow flag is raised where she sends a letter of inquiry to the parents of the students. If the child still does not attend class or incurs 5 days of absence, she would conduct a home visit where an intervention plan is discussed to the parents as well as the student.

Aside from one-on-one discussion and home visit, Aileen has also set up FGDs among problematic students in order to gather peer support from fellow Pantawid students. She has even discussed her future plans on organizing a student council/support club in the school to cater to the needs of Pantawid Pamilya students ranging from academic to non-curricular and even up to encouraging spiritual growth.

With all her pro-active contributions, it is no surprise that Aileen has received commendations and awards both for herself and her students. In 2015, one of her Pantawid Pamilya students, Benjamin Abella, was declared one of the Most Outstanding Cagayano Youth of 2015, an annual recognition by the UP Cagayanos of the University of the Philippines at Los Baños. This went on for the succeeding years where students from SFWSF would be nominated for the award.

In 2017, she herself received the Most Outstanding Non-Teaching Employee 2017 during the SALUDO Educators Award of the Department of Education.

Earlier this year, she was recognized as Region 2’s Pantawid Focal for Education and will be awarded during the 2019 Pantawid Partnership Summit of DSWD.

She closes with this message: “Nothing brings me greater joy than to see these students realize their dreams one day. Maybe I was never meant to be on the frontline of super stardom, I am not meant to be a singer or a dancer or a musician but that is because I am meant for something else. Working in the background does not mean I am insignificant, the role I play means I am an important part of a whole. I am meant to serve!”