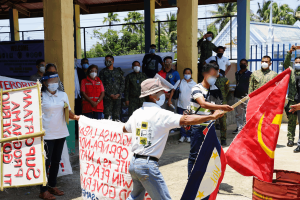 Almost 50 former rebels and 100 former members of the militant group Anak Pawis converged on April 24, 2021 in Pamplona, Cagayan to withdraw their support to the Communist Party of the Philippines (CPP) and its armed wing New Peoples’ Army (NPA).

Alyas Mau, a former rebel and now  a barangay official, shared his experience with the Communist Terrorist Group (CTG) as a worst nightmare saying that the false ideology of the group only caused nothing but hardships and death to its members.

As they return to the fold of the government, Ka- Mau and other former rebels were assured that the government will assist them as they faced new lives in the mainstream society.

In the program organized by National Intelligence Coordinating Agency (NICA), national agencies which include the Department of Social Welfare and Development (DSWD), Department of Interior and Local Government (DILG), Technical Education and Skills and Development Authority (TESDA), Philippine National Police (PNP), 501st brigade Philippine Army, 17th Infantry Batallion, Marine Batallion Landing 10 and other member agencies of Regional Task Force ELCAC presented their respective programs and services which may be availed by the FRs as they establish their new lives. 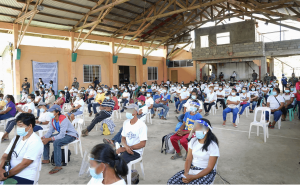 Meanwhile, Provincial Administrator Darwin Sacramed representing Governor Manuel Manuel Mamba said that the Provincial Government of Cagayan shall continue to deliver its programs and services to address the root cause of local armed conflict.

The activity was highlighted with the ceremonial burning of the CTG Flag which symbolized the surrenderees’ complete disaffiliation with the Communist party of the Philippines- New People’s Army.

It was followed by the signing of the Pledge of Allegiance where the surrenderees affirmed to renounce the atrocities of longstanding armed struggle and insurgencies.

After the program, each participants received relief packs from the Provincial Government of Cagayan and the Philippine National Police (PNP).