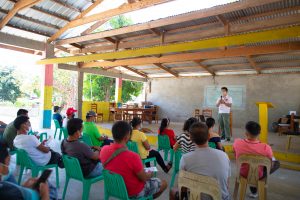 Santo Niño, officially the Municipality of Santo Niño formerly known as Faire, is a 2nd class municipality in the province of Cagayan where the people live in areas where they have to cross the Chico River through a means of transportation called “Bangka”. The KALAHI-CIDSS PAMANA Program is primarily geared to help these communities.

The eligibility to the program is attributed to its identification as one of the conflict-afflicted areas in the region.

The KALAHI-CIDSS: KKB Project is a community-driven development initiative of DSWD that aims to reduce poverty and vulnerabilities to poverty by addressing negative conditions relating to:

(iii)       Agriculture and fisheries modernization with social equity; and,

(iv)       Macro-economic stability and equitable growth based on free enterprise.

The PAMANA (“Peaceful and Resilient Communities”) is the Philippines Government’s peace and development framework that aims to strengthen peace building, reconstruction and development in conflict affected areas (CAAs). It is in line with the government’s goal of putting a permanent and just closure to internal armed conflicts of the country.

WHAT IS THE COVERAGE OF KALAHI-CIDSS?

In the expansion of Kalahi-CIDSS into the National Community-Driven Development Program (NCDDP), the following municipalities are eligible for coverage by the program:

THE IMPLEMENTATION OF KALAHI-CIDSS THROUGOUT THE COUNTRY

Employing community-driven development (CDD) as a strategy, KALAHI-CIDSS trains and engages communities together with their local governments (barangay and municipal) to choose, design, and implement development projects to address their most pressing needs.

The region formally started the program by subjecting the KALAHI-CIDSS Staff to an orientation conducted by the National Program Management Office (NPMO) spell out. After being oriented and trained on the different processes pertaining to KALAHI, they started the Social Preparation stage which is the first phase of the Community Empowerment Activity Cycle (CEAC) Process wherein the community and the Barangay leaders are being oriented and trained on how to implement the project.

As of today, the KALAHI-CIDSS Staff is already on the second phase of Social Preparation Stage wherein the six (6) barangays, Lipatan, Tamucco, Abriongan Uneg, Calassitan, Niug Norte and Mapitac have identified the sub-projects to be implemented in their respective areas

Once the Site Validation is completed, the sub-projects are set to be finalized.