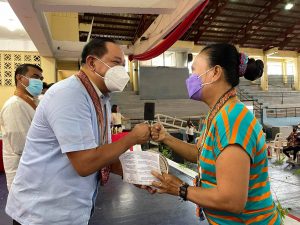 According to Presidential Proclamation 269 of former president Fidel V. Ramos, the observance of the International Day for the Eradication of Poverty is aimed at instilling in the public the virtues and principles espoused by the observance which is the refusal of extreme poverty and the respect of human rights, dignity, and freedom by recognizing appreciating the various initiatives of poor communities and local government units in uplifting the lives of poor for the greater advocacy of effectively eradicating poverty.

On the other hand, the Pamaddayaw, held in partnership with the Local Government Unit (LGU) of Tuguegarao City, recognized 20 4Ps families who waived out from the program and one college-graduate child beneficiary in a half-day event showcasing the testimonies and inspiring stories of the families amidst the challenges they faced due to poverty.

According to Regional Director Cezario Joel C. Espejo, the families have attained level three or self-sufficient category which means there is a steady and consistent income for the family to sustain their needs indefinitely even without the assistance from the program.

“Today, we celebrate with the families as they share with us their unique stories so that their lives’ lessons may also serve as an inspiration to us, to keep us strong and determined as we too face the various challenges in life,” he added. 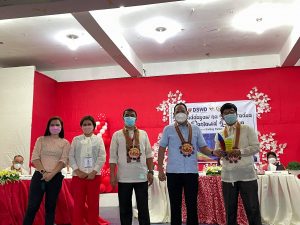 City Mayor Jefferson Soriano assured that the city government will continue to provide assistance to the families to ensure that they will not revert back to poverty. He further guaranteed that under his administration, they will continue to have access to services on health, education, skills-development and livelihood intervention.

Another highlight of the event is the signing of the Specific Implementation Agreement (SIA) between the Department and the LGU where it enumerates the role of the latter in transitioning 4Ps families to eventually exit from the program. Based on DSWD FO2 database, the city is home to 1,175 families of which 63 families are socially prepared to transition out of the program in the coming months.

Josibel Sibal, one of the grantee-graduates narrates how her family started out living in a makeshift shelter while she and her husband tried to make ends meet from odd jobs that paid by the day. With the help of the program, she was able to send her children to school and put up her own small business until she was able to make a steady income. Now they have a home they can call their own and livelihood that can sustain their needs that she felt she was ready to exit the program. “Malaki ang ipinagbago ng kalagayan ng buhay namin simula nang mapasama sa 4Ps. Ngayon na nakaka-angat na kami sa buhay, kusa na kaming lalabas sa programa upang mabigyan din ng tulong ang iba pang mahihirap na pamilya” (Our lives have changed since we became part of 4Ps. Now that we have become self-sufficient, we are voluntarily waiving our membership in the program so that some other family can also benefit from it.) Sibal said. 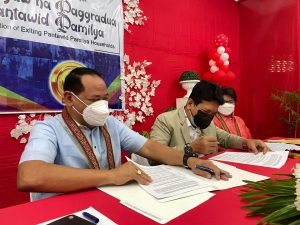 Republic Act 11310 or An Act Institutionalizing the Pantawid Pamilyang Pilipino Program provides that families can only remain in the program for seven years.