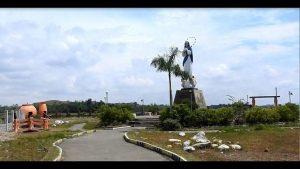 Bounded on the north by the municipality of Enrile, Cagayan and on the East of Cagayan River, lies the municipality of Sta. Maria, Isabela, a landlocked 4th class municipality at the northwestern part of the province whose people depend on agriculture and pottery as their primary source of living. The municipality envisions to provide enough water systems, street lights, and medical assistance to its people. More than these, the municipality dreams of having an empowered community, sustained with gradual and inclusive development.

Michael Abraham G. Pagauitan, Liga ng mga  Barangay (LNB), President of Sta. Maria, Isabela, shared that most of the people in their municipality depend on the assistance given by their Local Government Units (LGUs) such as assistance on the provision of medicines and even burial expenses. He further said that they give paramount importance to the provision of potable water systems in their locality emphasizing its benefits to the human body. However, due to their limited resources, they are left with no choice but to make do with what they have.

“Ang tubig ay importante, kahit nga wala tayong makain basta may inumin tayong malinis at sapat, ok na tayo. Kaya sa amin sa Local Government Unit, pangarap naming mabigyan ang lahat ng nangangailangan ng water system sa aming bayan. Pero dahil sa limitado naming pondo sa ngayon, magtitiis nalang muna kami sa kung anong meron (Water is very important in our lives, even if we do not have food, as long as we have water we can go on which is why it is our dream in our municipality to provide enough water systems for those in need. However, with the limited resources that we have, we are left with no choice but to make do with what we have), said Michael”

In 1991, the Local Government Code mandated the devolution of basic services to LGUs. This was anchored on the premise that LGUs are in a better position to address the needs of their constituents and can therefore deliver better services. However, full devolution was never achieved because the funds necessary to implement full devolution were not fully downloaded to LGUs.

Studies show that throughout Philippine history, there has been a tendency for governments to centralize power. Filipinos have been suffering from a symptom of what they call “Imperial Manila Syndrome”, the notion that political, economic and social underdevelopment is more prevalent the farther away a province is from the capital, Metro Manila.

It implies that provinces farther away from Manila in distance are indeed disadvantaged not only in terms of economic, poverty and human development indicators, but also in terms of dependence on internal revenue allotments which inhibits local growth. Physical distance from the capital also decreases rural funds for provincial development.

Bringing the government closer to the people 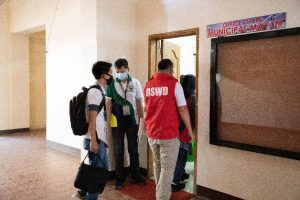 With the issuance of the Executive Order (EO) 138 otherwise known as the Mandanas-Garcia Ruling, the government is set to address inequality in financial resources among LGUs, improve their capacity, and enhance transparency and accountability among them.

It is a full devolution of the provision of basic services and facilities to the LGUs which will enable the national government agencies to assume more strategic and steering functions to address persistent development issues.

It is believed that the devolution could improve the lives of people and communities especially those that are far from the country’s economic growth centers because the Local governments who are on the ground and can directly feel citizen’s needs and aspirations will be able to respond promptly to the people.

This however, may not be implemented easily in the LGUs. The Local Chief Executives are faced with the dilemma of accepting devolution where they may be caught flat footed because they are mandated to implement the services of the national government which are far different from the processes they are used to practice in their respective localities.

As the devolution will result in the increase of their National Tax Allotments, their responsibilities are bound to elevate as well. Hence, they may not be able to adapt, especially due to lack of human resource equipped with the knowledge and skills on the processes of the national government. 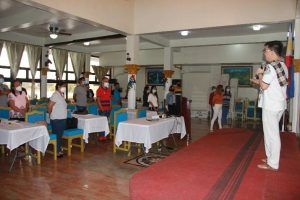 In response to the EO 138, the Department of Social Welfare and Development (DSWD) has been doing its part in capacitating the LGUs. By conducting municipal and barangay orientations as well as capability trainings through its programs specifically Kapit-bisig laban sa Kahirapan Comprehensive Integrated Delivery of Social Services (KALAHI-CIDSS), the DSWD has transferred knowledge and expertise to a total of 187 barangays comprising of community volunteers, barangay officials and Local Government Unit Officials. The orientations and training include the discussion  on the standard procedures of project implementation such as  social preparation, procurement, financial management, infrastructure development and monitoring and evaluation and Environmental and Social Safeguards Screening.

The training aims to transform the people in the community from being an ordinary citizen to knowledgeable citizens who are involved in the planning, budgeting and implementation of projects.

After a series of orientations and training conducted in their municipality, Mayor Pagauitan was happy to share that the municipality of Sta. Maria is now ready for devolution, he said,“Most of the LGUs may  not be ready, but the LGU of Sta. Maria is ready because the program is clear to us and it will definitely help our constituents. The beauty of what DSWD did is that the department trained our leaders. Through the KALAHI-CIDSS, our barangays are now capacitated, empowered and are now using their skills and abilities.

“It is inspiring to see them discussing their learnings in their offices. I know and I feel that they are actually ready and eager for the implementation. I am grateful that  they actually learned the processes in the government,” he added.

The local government unit of Sta. Maria is more than eager for the implementation of the Mandanas ruling. Having undergone various training conducted by the department, they are confident that they can be of better service to the people.

During the awarding of KALAHI-CIDSS Municipal Block Grants to 20 barangays in Sta. Maria with the simultaneous conduct of the groundbreaking ceremony, Mayor Pagauitan said, “The trust and confidence that the higher government and officials is now going down to the barangays. We are already empowering our leaders in the barangays, even the kagawads are at present, performing well, the tanods as well as the community are already cooperating. We in the LGU and our constituents in the community, especially our barangay officials and the barangay community are now experiencing the reality of services that are coming from the national government.”

Through the DSWD KALAHI-CIDSS, the community in Barangay Poblacion II will be implementing a dugwell which will provide households in the municipality of Sta. Maria with potable water within their reach. This is just one of the efforts of the government to brace the people in the upcoming devolution.

Michael Abraham expressed his gratitude to the government for finally heading their call and for the services offered by the department in empowering their people.

With devolution at hand, there is an opportunity to create and develop a devolved system of welfare that is fair, universal, simple and sustainable. The Department pledges its commitment that the LGUs within its cover will be able to adapt and evolve, as the national government devolves. ###Written By: Kayle Angelie C. Palattao