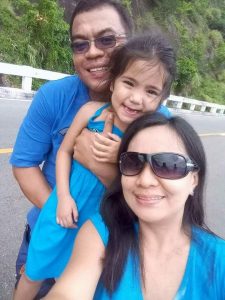 Raphael and Margie Unciano’s life remained silent for years as they long for the sound of a child’s laughter and cry. With their desire to experience a new rhythm and dynamic, they decided to become licensed foster parents to a child named Fatima.

It was through the Reception and Study Center for Children’s program in 2013 that Fatima was given a home. Her foster parents, Raphael and Margie, were childless for 19 years yet they still wanted to experience parenthood. Even if they were always taking care of their nieces and nephews, they still longed for a child of their own; to listen to the melodies of a child’s cry and laughter. Their desire helped them in firmly deciding to become foster parents to Fatima.

Fatima was born in Kuwait to a Filipino Mom and a foreign national Dad. Unfortunately, Kuwait did not recognize and allow the child’s registration since her birthparents were not married. Because of this issue, her birth mother was put to jail for eight months and after incarceration, Fatima and her biological Mom were deported back to the Philippines. Her biological Mom then decided to move to Qatar to work and leave Fatima, totally stopping sending financial support to sustain her daughter’s needs.

Thankfully, one of her birth mother’s friends took Fatima and appeared to the City Social Welfare and Development Office in Santiago City, Isabela, regarding the adoption of the child. That was the start of Fatima’s journey into the home of the Unciano couple.

Their home is now filled with harmonious sounds of laughter as Fatima dances to the music and sounds coming from the TV and music from her foster mother’s Zumba videos. Fatima also makes her foster parents laugh as she enjoys copying the voices of Raphael and Margie.

Aside from that, Fatima likes to mimic what Margie does, whether its household chores or doing exercises. As for Margie, she sees this as an opportunity to bond with her foster daughter and give her the love of a mother that Fatima deserves yet has never experienced.

Fatima also fills their home with music, as she shows interest in singing and playing the guitar for the couple. Mr. and Mrs. Unciano also praised the child for her creativity and ability to easily memorize songs. As they proudly said, Fatima can sing the whole song, “Let it Go” while copying the Disney princess’ motions and dance steps.

The child also shows excellence in her school. Fatima is currently in grade 5 and has shown impressive skills when it comes to learning. She’s active in attending her online classes and even asks for Margie’s help in order to understand the lessons better. At night, Fatima also spends her time reading and answering her modules, while listening to her favorite K-pop songs.

Unfortunately, as much as the couple wants Fatima to live a peaceful life, there are times when they cannot filter out the noise coming from the world. She experienced bullying from her classmates, as they taunted her and called her names due to being fostered. Thankfully, Fatima is very open to her foster parents, that is why she decided to tell them about her bullies. In turn, Raphael and Margie addressed the issue quickly when they talked to the bullies’ parents.

Due to this, both Raphael and Margie understood the need for honesty in their family. That is why they kept on reassuring Fatima through words filled with love and encouragement. “You might have not come from my womb but the love and care that we provide is pure and unconditional.” Margie stated. Raphael also showers Fatima with love and praises as the child adores the feeling.

In the end, Fatima understands their family situation and expresses her love for her parents all the more. As Fatima states, “I am grateful that even if I’m not their real child, they still nurture and love me like their own.”

Due to the love and care that they have given, the social worker has recommended the renewal of the Uncianos’ Foster Family Care License. Raphael and Margie are hoping that Fatima would be declared legally available for adoption so that she can permanently be placed in their homes.

While waiting, the couple enjoys the sweet melodic sounds in their household, as they continue to spend more time with their foster child as much as they can. Despite the noise that tries to ruin their symphony, Raphael, Margie, and Fatima still remain in sync and harmonious in their feelings of love and appreciation for each other.