Purificacion Balderama is living her simple life in the wilderness of Paradise, Gonzaga, Cagayan—a place where she started to thrive on making both ends meet. When her husband passed away 20 years ago, she was left financially dependent on her own. Lola Cion then continued to work as a laundress and lived with her youngest daughter; they led a modest existence in a small town. Both wallowing in the dilemma of poverty and enduring health problems contemporaneously led Lola Cion to a decision of giving up her work as a laundress. Now that she is financially and physically frail, her youngest daughter and five grandchildren are her sole sources of support and happiness.

With how things stand in her life, she is left with nothing to do. Talking with her grandchildren, listening to the radio, and enjoying the songbirds outside are her little hopes of making up the leeway. But there was a significant setback in their lives when Lola Cion lost her sight. Her face was always downcast, but she carried on as usual with a light of hope.

Albeit blind, she always had an upbeat attitude to put up with life’s bitterness. Magical and mysterious, it lures Lola Cion to something she could not yet see, but she could feel in her heart that she is bound into something good.

The look of despair left her face when her daughter told her she would be receiving money from the social pension program the following day. Lola Cion’s face flushed with optimism, and her eyes grew as deep and bright as morning stars. The sadness on Lola Cion’s face began to fade. Her disheartened eyes turned into overflowing joy reflected through the eyes of people she holds dear in her heart.

Lola Cion fed the family after receiving her stipend. She’s elated to know that she will be able to provide her grandchildren with their all-time favorite treats, medicine for her unwell condition, and food. Lola Cion’s overwhelming happiness is bursting after realizing one of the most memorable and satisfying experiences of her life: receiving her Social Pension.

She expressed her appreciation to DSWD because of the Social Pension Program allowance she receives. Since her children have their own families and they are also experiencing extreme poverty, she will not have to rely on them for financial support at all times.

In hindsight, Lola Cion’s life was challenging and sightless, but the Social Pension Program of the Department of Social Welfare Field Office 2 has made her see the light at the end of the tunnel. Though it may not seem like much to others, the small amount of social pension she receives each month goes a long way toward making ends meet. Her eyes told a story of how the Social Pension Program of DSWD turns a gift, that behind blindness, comes a glimpse of light.

Led by the DSWD, SocPen is a noncontributory monthly pension of Php500 to qualified seniors, i.e., indigent Filipinos aged 60 and above. The purpose of this program is to provide indigent elderly cash to augment their daily allowance on food and medicines. 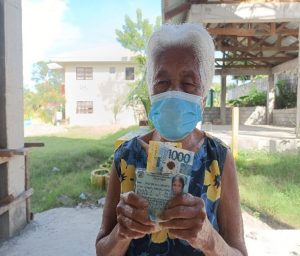 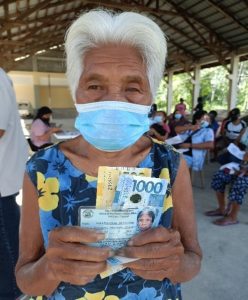